The earliest identified organisms were minute and relatively featureless, and their fossils look like small rods, which are very difficult to tell apart from structures that arise through abiotic physical processes. The oldest undisputed evidence of life on Earth, interpreted as fossilized bacteria, dates to 3 Billion years ago. Other finds in rocks dated to about 3.5 billion years ago have been interpreted as bacteria, with geochemical evidence also seeming to show the presence of life 3.8 billion years ago.

However these analyses were closely scrutinized, and non-biological processes were found which could produce all of the “signatures of life” that had been reported. While this does not prove that the structures found had a non-biological origin, they cannot be taken as clear evidence for the presence of life. Geochemical signatures from rocks deposited 3.4 billion years ago have been interpreted as evidence for life, although these statements have not been thoroughly examined by critics. 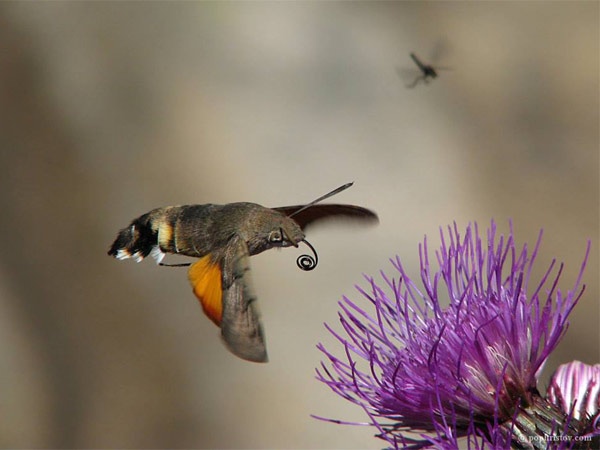 Macroglossum stellatarum, known as the Hummingbird Hawk-moth or sometimes the Hummingmoth, is a species of Sphingidae. Its long proboscis and its hovering behaviour, accompanied by an audible humming noise, make it look remarkably like a hummingbird while feeding on flowers.

It should not be confused with the moths called hummingbird moths in North America, genus Hemaris, members of the same family and with similar appearance and behavior. The resemblance to hummingbirds is an example of convergent evolution.

It flies during the day, especially in bright sunshine, but also at dusk, dawn, and even in the rain, which is unusual for even diurnal hawkmoths. Its visual abilities have been much studied, and it has been shown to have a relatively good ability to learn colours.